Resistance is force required to tow the ship without interference from towing ship.

Apart from above below components are also add up to ship resistance.

Boundary layer of the liquid alters the virtual shape and length of the body, the pressure distribution at the stern is changed and its forward component is reduced.
So there is net force acting against floating body movement which is called form drag or viscous pressure drag.

The momentum supplied to the water in the boundary layer by the hull is a measure of the frictional resistance. If the hull shape is blunt at stern, it will cause flow to separate and reduce pressure in aft. Eventually it will cause more drag on the ship. Eddy created consumes more energy from the system.
.
Ship moving on surface will have free surface compared to submerged body. Resulting pressure distribution on the hull creates waves on the surface and it shall be continuously recreated. This consumes more energy from the ship and called wave making resistance. 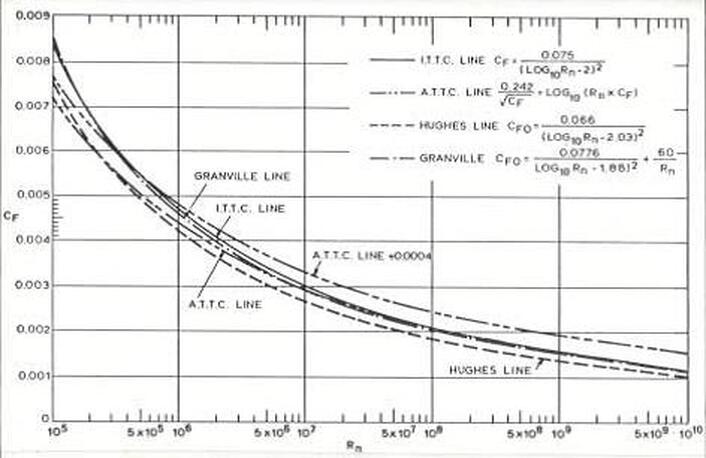 which is known as the ITTC line and is the current standard It is important to appreciate that this is a model/ship correlation line and not a frictional resistance line.

At low Froude numbers or speed, resistance is dominated by viscous resistance and as the speed increases, wave making resistance dominates.


Viscous resistance is combination of frictional resistance and form drag on ships.

​Free surface pressure difference creates waves which runs away from the body. In this process ship need to spend some energy to create these waves. This energy is the measure of wave making resistance.

Panel method is most suitable way to do the simulation of this wave making resistance.
In this method surface of the ship is simulated by a series of panels with distributed sources and sinks.

In high speed vessels, bulbous bow helps to cancel this wave making resistance due to cancellation of waves near forward body. However Bulbous bow length, shape, volume and location is deciding factor for this resistance cancellation.

Wave breaking resistance results from the breaking of waves near the ship, predominantly at the bow. The energy lost is transmitted to stern which creates large eddies.

Wave making resistance curve will have hollows and humps due to interference of four waves.
So it is not necessary that higher speed will have higher wave resistance, So design speed shall be chosen in hollow region and must be able to cross nearest hump region. 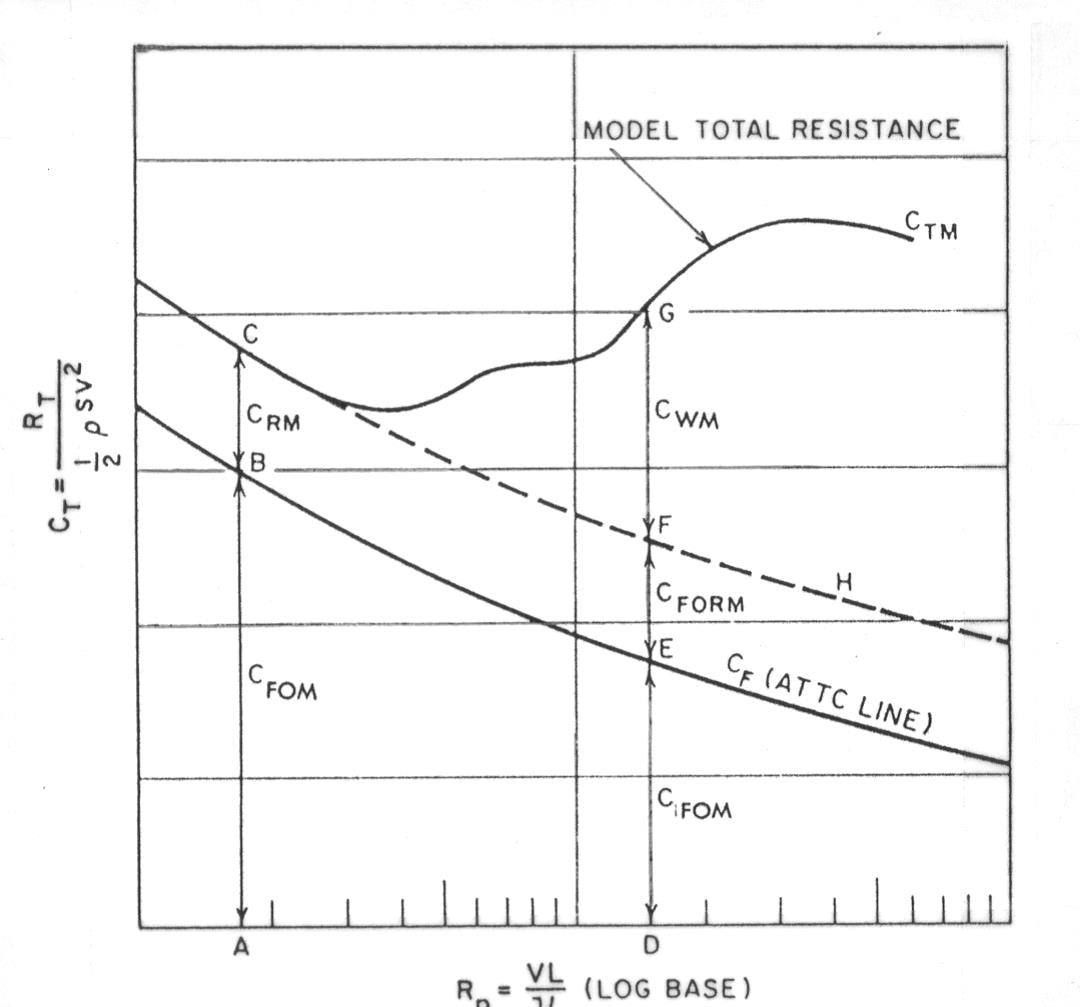 If the curvature near the stern becomes too abrupt, the water may no longer be able to follow the hull and breaks away, and the space between the hull and the smooth flowing water is filled with vortices. 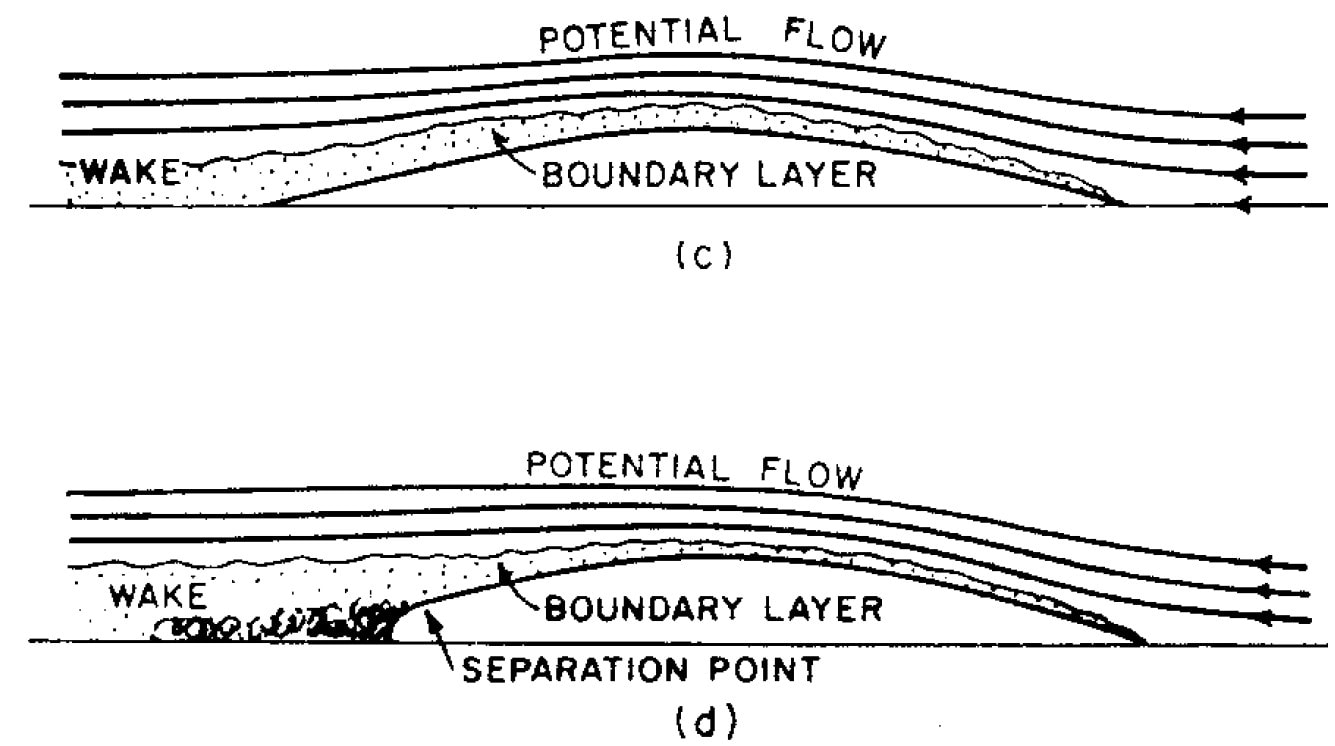 In blunt hulls flow ahead of the bow becomes irregular and complex, usually leading to a breaking wave.

Bow wave breaking is considered to be due to flow separation at the free surface, and it can generally be avoided by requiring that the tangent to the curve of sectional areas at the forward perpendicular be not too steep.

A ship sailing on a smooth sea and in still air experiences air resistance but this is usually negligible, speed is quoted at a height of 10 m from sea level. Near the sea surface the wind is considerably slower than at and above the datum height.

Added resistance due to waves.

​Winds are seldom encountered at sea without wind–generated waves, sometimes from distant storms. Such waves approaching the ship from ahead can cause appreciable added resistance, in part from the diffraction effect of the moving hull on the encountered waves and partly from the indirect effect of the heaving and pitching motions caused by the waves.

In beam and quartering seas, there may be heavy rolling and some yawing, both of which will add to the resistance. Required rudder action, in particular during tight maneuvers, may also make a significant addition.

​
​The principal appendages in ships are the bilge keels, rudders, bossings or open shafts and struts. These resistance are calculated based on viscous resistance of appendages .Main inputs are length and wetted area of appendages.

Effect of ship trim on resistance

​
​Due to the change in pressure distribution around a ship at different speeds, it will rise or sink and trim.
At low speeds there is a general sinkage and a slight trim by the bow as compared with the at rest condition, As speed increases the movement of the  bow is reversed and at about Fn = 0.30 the bow begins to rise appreciably, the stern sinks still further and the ship takes on a decided trim by the stern.

In the average merchant ship form, additional trim by the stern in the at rest condition usually results in an increase in resistance at low speeds and a decrease at high speeds. At low speeds the increased draft at aft makes the stern virtually fuller, with a consequent increase in form and separation resistance, whereas at high speeds this is more than offset by the reduction in wave making due to the finer entrance in the trimmed condition.

In ballast condition ship is designed to trim by the stern in order to ensure adequate immersion of the propeller, that creates high higher resistance at low speeds but less at high speeds

If the ship is considered as being at rest in a flowing stream of restricted depth, but unrestricted width, the water passing below it must speed up more than in deep water, with a consequent greater reduction in pressure and increased sinkage, trim usually by the stern, and resistance. The sinkage and trim in very shallow water may set an upper limit to the speed at which ships can operate without touching bottom.

Effect of Ship Length,Breadth and Draft on resistance

Length is expensive in first cost, is limited by docking and navigation restrictions, while added length increases scantlings, equipment and manning scales. From a resistance point of view, greater length for a given displacement will reduce the wave making resistance but increase the frictional resistance, so that longer lengths will be beneficial in ships running at high speeds and vice–versa. Longer lengths are also generally beneficial for behavior in rough seas.

An increase in draft, T, is generally beneficial for resistance, and is a cheap dimension in terms of cost. However, it may be limited by depths of harbors, canals, or rivers.

The beam, B, is one of the governing factors in ensuring adequate stability, and a minimum value of B/T is generally necessary on this account. An increase in B will increase the resistance unless it is accompanied by a corresponding finer hull. In cases of low speed ships however, a small reduction in length and a compensating increase in beam, because of the resulting decrease in wetted surface, may result in little or no increase in resistance. This results in a cheaper ship and also meets the need for increased stability in ships with large superstructures. This idea has been exploited in a number of large tankers.

A similar formula for the sustained sea speed in terms of the prismatic coefficient CP, is

In full ships considerable parallel body can be worked in with advantage, and the entrance can be short, the run being long and fine to minimize flow separation and form resistance. As CP decreases, so does parallel body, and the entrance is made longer to reduce the increase in wave making resistance, the LCB moving aft in consequence. Most of the reduction in CP is thus accomplished by fining the entrance, the change in the coefficient of the run being much less.