The three basic objectives of the damage control are:
​

Prevention means to take all practical preliminary measures, such as maintaining watertight integrity, providing reserve buoyancy and stability before damage occurs.Minimization is to minimize and localize damage by taking measures to control flooding, preserve stability and buoyancy.
Restoration is to accomplish as quickly as possible, emergency repair or restoration after occurrence of damage. Restoration requires regaining a safe margin of stability and buoyancy. The primary duty of the damage control organization is to control damage.Damage control objectives are attained by taking necessary action to do the following:


Ships have been lost and others have suffered unnecessary damage because investigating personnel have neglected one or more of these four principles.

As a general rule, complete flooding of a compartment or flooding to sea level indicates that a compartment is open to that sea. Flooding to a lesser height may indicate that the puncture is relatively small or that progressive flooding is occurring.
Although progressive flooding can be verified by subsequent soundings, the general rule does not always hold true.
In more than one case, an unisolated saltwater line leading through a secured compartment has been ruptured and has caused the space to become completely flooded without direct access to the sea.
Such a condition is even more dangerous than a penetrate of a hull because, in time, the pressure within the compartment will be gradually high more and more and cause previously undamaged bulkheads to collapse.

One of the most important damage control measures is to control flooding. Damage by fixed systems or portable pumps is ineffective in handling flooding caused by damage until the rate of flooding has been controlled. The entire pumping capacity of drainage system is sufficient to care for flooding only when the leaks are small. All pumping facilities cannot be used on any single flooded compartment. Therefore, it is essential that it need to isolate compartments flooded by underwater damage by
watertight subdivisions before dewatering efforts can be successful.

Basically, two methods can be used in the control of flooding:
Preparatory Measures to Restart Flooding Before Damage

It has been wisely said that 90 percent of the work of damage control- the important part is accomplished before damage and only about 10 percent after the ship has been hit. Most preparatory work consists of measures taken to toughen the ship to resist flooding. An important first step is for all personnel concerned with damage control to learn what features have been designed into their ship to enable it to resist flooding.

They include:
Type of flooding

There are two major types of flooding:
SOLID:

If the ship has received severe underwater damage, compartments will be badly ruptured and completely flooded. Little or nothing can be done to correct this damage.Isolate the compartments to permit concentration on compartments that can be repaired to prevent progressive flooding.
(Solid flooding refers to a compartment that is completely filled from deck to overhead.)
To be able to flood solidly, a compartment must be vented. Venting can take place through an air escape, an open scuttle or a ventilation fitting, or fragment holes in the overhead. Solid flooding has no other effect than to add weight at the center of gravity of the ship.

Compartments that are only partially flooded because their outboard bulkheads contain small holes,cracks, loose rivets, broken seams, or splinter holes, allow progressive flooding to take place. If nothing is done about these holes,the ship will lose buoyancy and list or trim stability. Partial flooding refers to a condition in which an intact compartment is not completely flooded.An “intact compartment” means that the deck on which the water rests and the bulkheads that surround it remain watertight.
If the boundaries remain intact, water will neither run into nor out of the flooded compartment as the ship rolls.The final result of partial flooding is usually a decided loss in overall stability.

Estimate of Damaged Ship's Situation
The most significant factor for ship stability after damage situation is the ability to keep the ship afloat.

Ability to keep the ship afloat

The following factors have an important bearing upon the ship's ability to stay afloat.
Determination of whether flooding is progressing

The first step to be taken is to determine whether or not flooding is progressing.This can be done by a careful survey, including observations to determine the rate of increase of list, trim, and bodily sinkage.

Other steps including the plugging and patching of holes, and removal of damage water with the  available capacity of undamaged pumping and drainage equipment.

A substantial underwater explosion usually results in the entrance of a great mass of water with extensive free surface, the combined result of which is a reduction of stability. The seriousness of stability loss can be gauged by the extent of the free surface, and by the behavior of the ship with respect to list and tenderness. List, or capsizing in the ultimate case, is due to negative GM, or unsymmetrical flooding, or a combination or both. Whatever the case, list is undesirable. List acts to reduce stability, as well as to make it more difficult to fight the ship. Except in the case of battleships and large aircraft carrier, other ships may develop very small, or even negative GM. Negative GM is rare if liquid ballasting instructions are followed, but the
possibilities must not be overlooked after damage.

The following facts should be given particular attention:
Reserve Buoyancy After Damage
​
If the ship side above the waterline is holed, some flooding may take place as the ship rolls. Reserve Buoyancy as well as other stability characteristics will suffer. A heavy under water explosion will result in the entrance of a great mass of water. Flooding will be limited by subdivision, dependent upon the type and complexity of the ship. Tn any case the relative amount of freeboard remaining after damage will be a good indication of the residual reserve buoyancy.

The freeboard remaining at the ends of the ship may be used as a measure of the residual longitudinal stability. Trim is not apt to be fatal unless the sea is washing over the weather deck. In fact, ships have steamed long distances with sterns submerged.

Flooding in the middle length increases sagging stresses, while flooding at the ends increase hogging stresses. If the ship does not break in two immediately, a prompt, careful examination should be made of the principal strength members (main deck, stringer plate, shear strake, bilge strake, and keel.) Shoring of decks and bulkheads may be beneficial if stanchions have been disrupted. 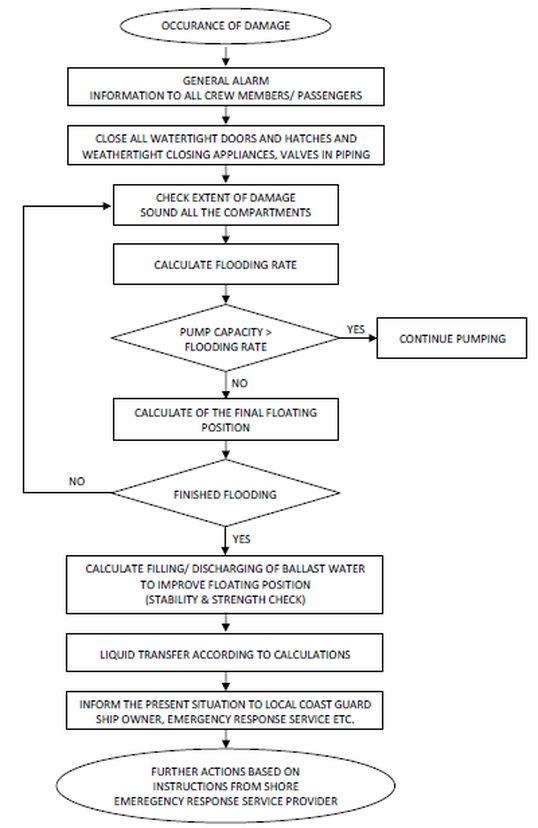 Actions to be Taken in Case of Damage

Following actions are to be taken immediately after damage in order to ensure the watertight integrity of the vessel and to assess the damage:

1. Closing of watertight doors and hatches

All watertight hatches are to be closed immediately. In general the status of the closed hatches can be checked on the status panel on the bridge. Additionally a visual check by a designated  person shall be performed. In case it is deemed absolutely necessary to open a watertight door or hatch in the damaged condition in order to proceed with further actions, it should be carefully judged whether this hatch/door is crucial to prevent progressive flooding. After use, the hatch is to be closed immediately.

All valves in the piping system are to be closed immediately as far as the connected pipes are not used for the pumping operations.

4. Check the extent of damage

If possible a visual check of the extent of damage and the affected compartments shall be carried out.

Draught readings at the forward, mid and aft draft marks shall be performed, the heel angle and trim shall be calculated based on the draught readings.

By periodical checking of the soundings of the damaged compartments and comparison with the draft readings, a calculation of the water ingress and flooding rate shall be made.

Bilge and ballast pumps are available for pumping out water from the damaged compartments. Two scenarios – a) the amount of water ingress (flooding rate) exceeds the available pump capacity, the compartment must be isolated by closing all water tight accesses including valves

in the piping system and b) the pump capacity exceeds the flooding rate, the pumping shall be continued. It is important that the pumps shall be kept in a permanent stand-by mode and ready for use, at any time.

Before any filling or discharging of water ballast carried out, a thorough check and precalculation of the resulting floating position is to be carried out and the limit values for stability and strength are to be checked. The crew must be aware that filling or discharging of water ballast tanks can have negative influences on the stability due to the effect of free surfaces for
partially filled tanks. In order to minimize the heel and trim of the vessel, it may be advisable that water should be pumped in the tanks opposite to the damage location. If possible, the filling of slack tanks should be preferred to improve stability of the vessel.

11. Determination of ground condition, in case of grounding

Check the ground condition and extent of damage by a diver. This check shall be performed only with the necessary safety measures when the ship is in a stable position and no movement of the ground is anticipated.

12. Information to the owner, coast guard

The local coast guard and the ship owner shall be informed about the present situation. A possible outflow of oil should be stated immediately.