​Sea fastening is fastening cargo while transportation in sea. When moving cargo by sea it must be secured such that any movement which can damage cargo or ship must be avoided. Any major movement of cargo might result in stability problem which will jeopardize vessel,cargo and crew onboard.

Different cargoes will have different type of securing arrangement based on shape,size and carrier vessel. 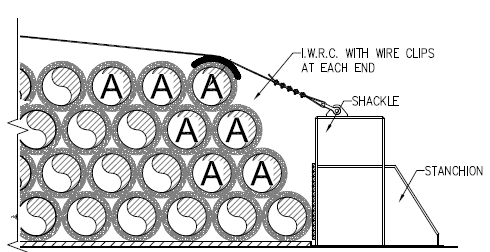 Jackets are normally transported by barges for yard transfer or launching. These jackets are fastened on barge

WHAT IS STOWAGE PLAN DURING SEAFASTENING

​​If neither a motions study nor model tests are performed, then for standard configurations and subject
to satisfactory marine procedures, the following motion criteria may be acceptable.

a. Roll and pitch axes shall be assumed to pass through the centre of floatation.

c. Phasing shall be assumed to combine, as separate loadcases, the most severe combinations of
d. For Cases 7 and 8, the departure shall be limited to a maximum of Beaufort Force 5, with an improving forecast for the following 48 hours. The voyage duration including contingencies,should not be greater than 24 hours.

e. For Cases 9 and 10, the criteria stated is given as general guidance for short duration barge towages and vessel transports. The actual criteria should be agreed with the GL Noble Denton office concerned, taking into account the nature of the vessel or barge and cargo, the voyage route, the weather conditions which may be encountered, the shelter available and the weather forecasting services to be utilised.

f. For Case 11, the design loading in each direction shall be taken as the most onerous due to:
g. The additional heel or trim caused by the design wind should be considered. For most transports, it is permissible to omit the effects of direct wind load when computing the forces on the cargo (see Section 8.3). If the total effect of the wind on the cargo due to direct loading and wind heel are more than 10% of the loads from the default motion criteria, then they shall be
added.

​Use below online calculator and change values in box to get motion loads as per NDI criteria.
Click to set custom HTML

In this context, seafastenings include any grillage, dunnage, cribbing or other supporting structure, roll,pitch and uplift stops, and the connections to the barge or vessel.

GRILLAGE AND SEAFASTENING DESIGN DURING TRANSPORTATION AND MATING


Design Basic of Grillage and seafastening

Structural Analysis during Load out operation, during Transportation and Float over Operations shall be done for structure verification.

Load out FEM analysis shall be performed to check the structural integrity of both grillage designs and under hull deck strength.

Float over Analysis shall be checked for grillage members and Hull structure to have adequate strength against the loads from Jack unit during Float Over operation. Max Vertical and lateral load  shall be taken from Mating Load Analysis.due to the structural strength, Limit of Max Vertical and Lateral load during Float-Over operations can be defined based on the strength limitation of structures.