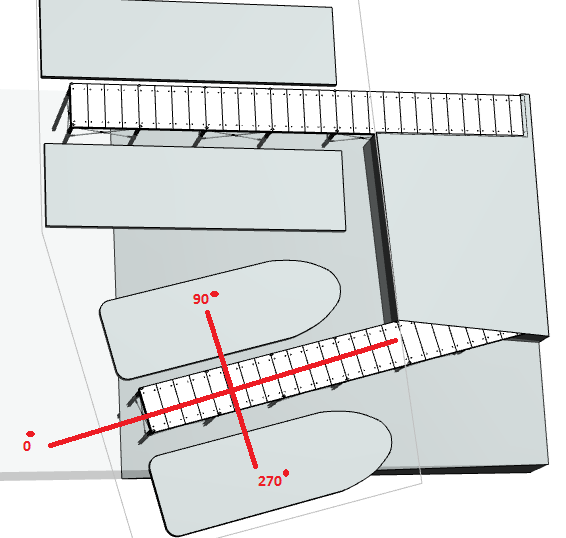 Wharf shall moor the barges and tug boats of various sizes on both sides of wharfs. This Wharf structure are designed with steel mono-pile, with steel pile head platforms installed. The wharf will be fitted with Cone Type or typical tyre fenders on the Pile to protect against impact and facilitate landing of ships.

Mooring system to wharf side shall comprise of Braided Nylon Ropes and mooring bits. Mooring system shall be designed for 10 yrs return period environmental loads including storms in the particular location. The maximum approach velocity and angle for berthing shall be specified based on Wharf structural design.

During the design of wharf System, the following 2 design conditions shall be considered:

During Ship berthing on site, there will be berthing loads acting on Wharf through fenders.

For Ship permanently mooring on site, 10 years return period shall be considered for wind. In order to design the wharf System, berthing loads, mooring loads from TUG/BARGE shall be assessed first.
The berthing loads for Berthing Condition will be assessed based on the berthing energy calculated as per BS 6349-Part 4: Code of practice for design of fendering and mooring systems. Mooring loads for ship Mooring will be calculated based on hydrodynamic analysis using appropriate software.
Based on these berthing loads and mooring loads, the piles of Wharf, fenders of Wharf, mooring lines and relative equipment shall be designed.

Water depth near jetty shall be considered in the design, and the following sea states are to be considered for different conditions:

The sea state is considered as benign, and as per the berthing conditions specified by BS 6349- Part 4, “Sheltered berthing, difficult” shall be chosen.

For ship mooring on site, 10 years return period of wind shall be considered for environmental loads.
BASIS OF BERTHING ENERGY CALCULATION

The total amount of energy E (kNm) to be absorbed, by the fender system either alone or by a combination of the fender system and the structure itself with some flexibility, may be calculated from the following energy formulae:

This energy depends on the velocity of the vessel normal to the berth and a number of factors that modify the vessel’s kinetic energy to be absorbed by the fender system and the structure.

The berthing velocity of the vessel normal to the berth depends on the vessel size and type, frequency of arrival, possible constraints on movement approaching the berth, and wave, current and wind conditions likely to be encountered at berthing. The velocity with which a ship closes with a berth is the most significant of all factors in the calculation of the energy to be absorbed by the fendering system.

In more difficult conditions velocities may be estimated from below Figure on which five curves are given corresponding to the following navigation conditions. 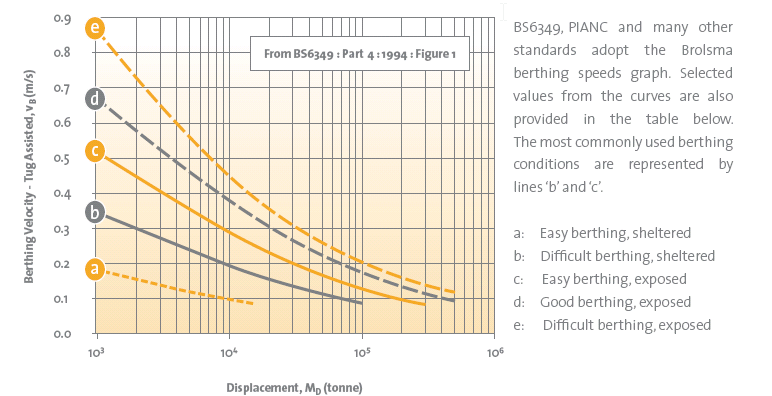 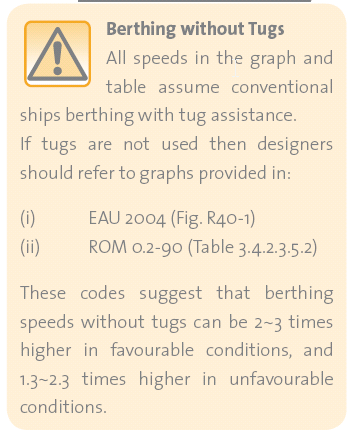 A vessel will usually berth at a certain angle and hence it turns simultaneously at the time of first impact. During this process, some of the kinetic energy of the ship is converted to turning energy and the remaining energy is transferred to the berth. The eccentricity coefficient represents the proportion of the remaining energy to the kinetic energy of the vessel at berthing. The formula for calculating the coefficient is given as follows (BSI, 2014):

Where K is the radius of gyration of the ship.
K = (0.19Cb + 0.11) L
L is the length of the hull between perpendiculars (m).
Cb is the block coefficient
Cb = displacement (kg)/(L(m) x beam(m) x draft(m) x density of water(kg/m3))
R is the distance of the point of contact from the centre of mass (m).
γ is the angle between the line joining the point of contact to the centre of mass and the velocity vector. 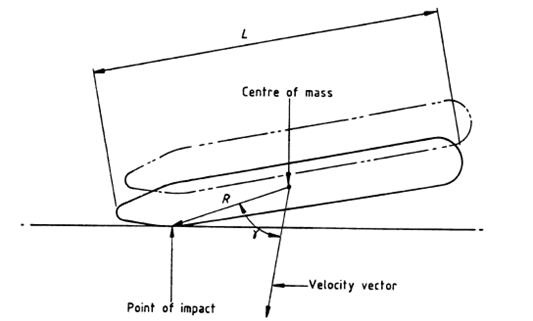 The softness coefficient allows for the portion of the impact energy that is absorbed by the ship’s hull. Little research into energy absorption by ship hulls has taken place, but it has been generally accepted that the value of CS lies between 0.9 and 1.0. For ships, which are fitted with continuous rubber fendering, CS may be taken to be 0.9. For all other vessels CS = 1. 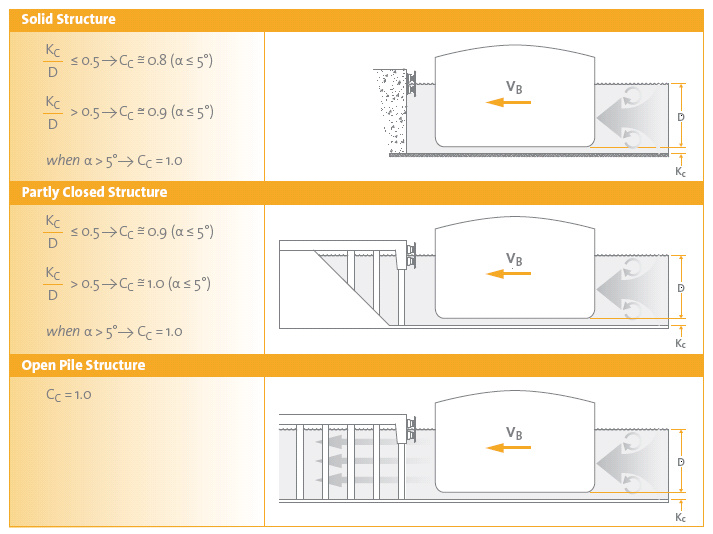 It shall be assumed that the first berthing fender will absorb 100% of total berthing energy. 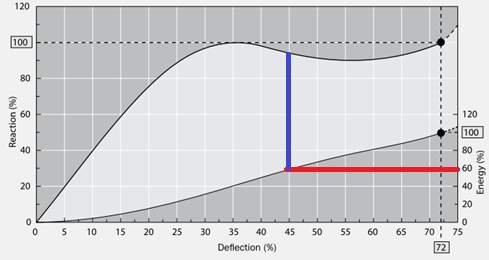 Diffraction Radiation calculation are performed with software. This classical problem of diffraction radiation leads to the evaluation of the hydrodynamic loads
on a structure, submitted to regular waves and enable to get accurate RAOs operation of the vessel. The effect of shallow water on drift loads is considered in the analyses and provides proper drift forces on the hull (QTF, Newman Approximation). Ship hydrodynamic model shall be used which gives resultant forces bit higher than original barge and tug boat. 30 x8x3 m barge hull is modelled with windage area of 10x76x4 This arrangement represents hull with cargo windage area or tug boat with accommodation windage area.
Time Domain Mooring Analysis

The analysis is an assessment of the loads made at the Mooring bit, fenders and the mooring lines based on a numerical model using available data. The simplified configuration of the Barge/Tug boat is modelled in Moses as per design data previously presented and based on the following assumptions

Second, the time domain analyses for the combinations of maximum individual wind wave and current are run. The duration of the simulations are 3 hours at real time ensuring the capture of sufficient number of low frequency motions cycles.